This post is brought to you by IAI America.

In a system for performing the alignment of some resin blocks, the ROBO Cylinder was adopted. The company’s products include designer plates to be used on the floor of a house by bonding resin blocks.  Previously, an air cylinder was used, this was changed to ROBO Cylinder which improved the cycle time and reduced the occurrence of Choco-Tei events.

When air cylinder was used

Because the resin blocks were misaligned by the impact of the air cylinder stop, they were operating it at a reduced speed. However, Choco-Tei was still occurring about 10 times a day because of the misalignment due to unstable speed. To rearrange the resin block and to recover from Choco-Tei, it took about 1 minute.

After changing to ROBO Cylinder
By replacing air cylinder to ROBO Cylinder, and adjusting the pressing force and acceleration/deceleration, they could increase the operating speed while minimizing the impact at the time of stop. In addition, Choco-Tei was reduced to near zero. 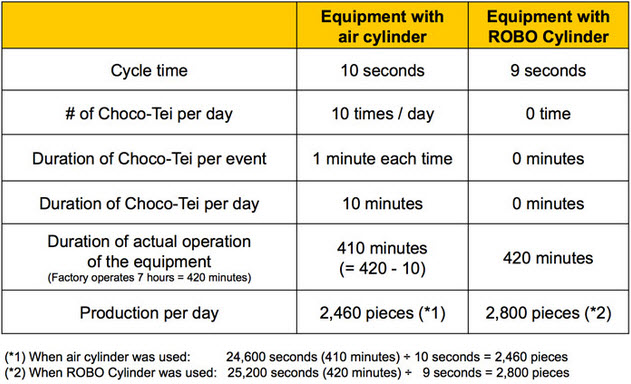 Want to Learn More about IAI?