This post is brought to you  by Universal Robots.

There are many reasons to implement a collaborative robot—or “cobot”—from Universal Robots. Manufacturers love their flexibility and ease-of-use, and that they provide the fastest payback in the industry at only 195 days. But cobots from Universal Robots continue to bring significant value for years to come—long after that initial payback period. 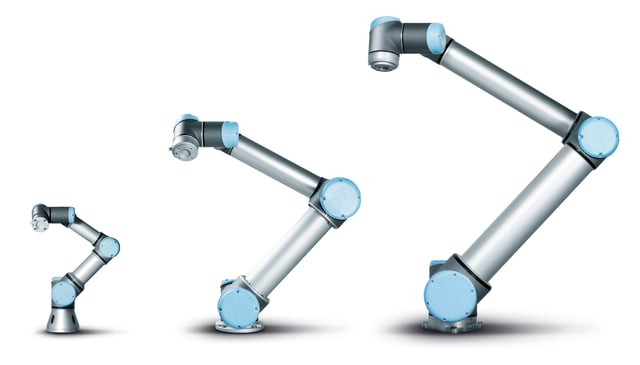 A survey of our users reveals that despite being put through heavy duty cycles year after year, the cobots are still running strong, in applications that include pick-and-place, gluing, welding and assembly, and machine-tending.

“We just achieved the one millionth part out of our UR5 cell in less than a year. The accuracy and repeatability over time was a big concern for us. We were apprehensive, questioning whether we could put the robot through this kind of duty cycle in a high-volume cell and get year-after-year repeatability. We spot check the robot every few months to make sure the axes are performing and it is as good today as a year ago when we turned the cell on.

“Our team likes knowing that spare parts are held at their distributor’s facility or at a local UR office that can overnight parts if need be. We didn’t have such a great experience with some of our other robotic applications. If a robot went down, it was time trouble-shooting over the phone. It was a week or two of downtime waiting to get parts in, followed by an external engineer having to come in and install and requalify it. With the UR robot’s modular design, we can install parts ourselves without being handcuffed to an integrator. We think this is a better way to go for high-volume cells.”

“Six years after we bought our first robot, it is still in operation 14 hours a day, feeding pieces into a lathe, a cutter and a washing machine. The robot has had two joint replacements over the years, but we keep extra joints in stock and can easily exchange the joint by ourselves. Our UR5 has proven to be an incredibly stable robot. We have not experienced any downtime with it despite putting it through high duty cycles for so many years.

“After having successfully installed the machine-tending application, we bought another UR5 five years ago to automate the spray painting of gear wheels. The robot is used even on small series down to five work pieces each. It is in continuous operation 6 hours a day, spray painting an ever-expanding array of gear wheels. We have had one joint replacement on it in five years. I’m very happy with the longevity of these robots.”

“We bought the third robot Universal Robots ever sold. This was back in 2009 when the company just consisted of four people and the CTO himself came out to demo it. We have been very pleased with our “old” robot. We have done two joint replacements and just recently got a new screen and controller for it, so it’s still running 8 hours almost every day moving glass pieces from a pallet to a conveyor.

“In 2012, we were also among the first customers to get the new UR10 when it came out. This robot is sandblasting mirrors and has been in operation ever since we purchased it with no repairs or breakdowns whatsoever. The same can be said for our third robot—another UR5—that we got in 2012; it’s still going strong, dispensing glue on mirrors with no maintenance to speak of.”

“We were one of the first manufacturers ever to buy a robot from Universal Robots. In 2008, we bought a UR5 robot arm to automate the feeding of our CNC machine. It ran in a trouble-free operation 5 days a week for two years. When the second generation of UR5 was launched by Universal Robots, we decided to exchange it for the new model, because we wanted the features in the new software like torque control. Our second UR5 robot has now been operating for 5 years, and neither joints, nor other parts have been exchanged.”