Imagine a collaborative robot that knows where it is and what needs to be done. A cobot capable of inspecting whether a part in your manufacturing process is complete and capable of jumping automatically to another task if it is not. A cobot that even reacts independently if an error occurs on one of your machines. Does this sound like a very futuristic scenario to you? For years now, the concept of making machines more connected has been the core issue of Industry 4.0 and Smart Manufacturing. Tend is taking a unique approach to help companies not just chase those ideals, but realize them with their AI-based cloud robotics platform, “in.control™”.

But let’s start from the very beginning: You buy a collaborative robot, you attach a regular webcam, an end effector of your choice, and then you let Tend supply the smarts; The company developed a system consisting of a small, preconfigured computer that securely connects the robot to the internet, and passes data to and from the robot and the attached webcam. The webcam supplies the vision to the robotic arm now able to view its surroundings; for example, a screen on a machine. Then the Tend software platform in.control comes into play; analyzing what the robot sees, and based on that, sends instructions to the arm: “Hit the start button on machine 3” or perhaps “turn the dial 30 degrees clockwise on machine 6.” In simple terms: The robot will execute based on what it is watching.

For instance, a 3D printer may indicate through its touchscreen that it’s done. You can teach the robot which part of the screen to read, and then follow up with actions such as unloading the printer and selecting a new job.

Besides having the robots interact with the machines visually, as a human would, all the configuration data and instructions are stored in a cloud, turning the robot into an AI-powered machine that can send, store and receive the data. Thus the software is also able to provide real-time production analytics for the end users, so they can monitor and control the performance of their production line from their mobile device. 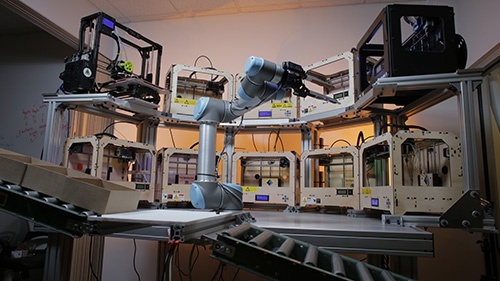 In order to develop and test their new system, Tend needed one thing, of course – a collaborative robot. And this is where Universal Robots came into play. “One of the first robots we tested the system on was the UR5,” explains Eric Foellmer, Chief Marketing Officer at Tend. “Because it’s flexible and easy to work with, it allows us to connect to the robot in minutes and install on a customer site in under an hour, and its reliable performance helps position the camera accurately when reading screens and testing parts,” he explained.

The cobots have not just proven useful in the testing space. Many of the company’s early clients have already connected their UR robots to the Tend in.control system, with great results. ”We’ve received tremendous feedback so far,” adds Eric. “We actually heard from one customer using Tend in.control on the UR5 that they already needed a new screen tester attachment, because they were using it around the clock and wore out the original end effector. It was a great problem to have.”

Help executing the principals of Industry 4.0

There are plenty of industries that would benefit from this type of solution. For now, Tend focuses on the manufacturing space where collaborative robots basically have to add materials and remove finished products from machinery, like 3D printers or CNC machines. But anywhere cobots control processes and have to tend other machines visually, the platform can be used.
And this is the key aspect: The system allows the cobot to work with other machines in a very human way – in a visual way. By taking this approach, Tend closes a gap in Smart Manufacturing. “Machines were not necessarily designed to interact with each other, and that’s one reason why it’s such a big challenge right now to execute the principals of Industry 4.0. We leveraged the one common way that machines were designed to interact with humans, and that’s visually – so we found a way to allow the robots to do that as well.”

Taking the plunge to Cloud Robotics with Universal Robots+

With their mission of bringing what the company calls “Smart Cloud Robotics” to the manufacturing floor, Tend is an ideal partner to be included in the Universal Robots+ showroom.
“We just started the process of becoming part of the Universal Robots+ showroom, which is a great opportunity for us to gain additional exposure with UR’s customer base,” says the Tend CMO. “Working directly with Universal Robots is a huge advantage, as it allows us to determine what kind of things customers are trying to do with their cobots and how we can best support them with our products,” he added.

Tend’s in.control™ software platform is already available on the market and being used in several applications, although the major launch is still to come: During the Automate show in Chicago (April 3 – 6), Tend will present the solution to a broader public for the first time. At booth 2802, they will be displaying a UR5 with an attached vision camera, simulating a machine tending task by reading a touchscreen display and responding according to the text prompt on the screen.

Learn more about how to get started with UR's free ebook!